"'The Long Green Line (tm)' of John Deere Tractors has included several that were classic - the models 'D', 'A' and 'G', among others. But none wears that designation more deservedly than the 4020. It was the most popular tractor of its time, and modifications during its lifetime kept it ahead. Family farming in the 60's was a changing way of life. Old values remained, but the farm came to be looked upon as an 'agribusiness'. The 4020 was uniquely suited for such farming operations because it, too, was "all business". 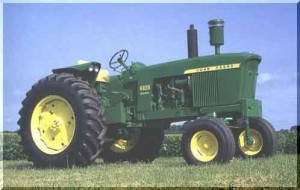 It was an era when farmers were doubling up field operations to achieve economies by reducing the number of trips over their fields. The 4020 had the power to accomplish this, pulling not just a disk, or a planter, but both, hooked in tandem, in the earliest steps toward minimum tillage. It pulled not just a baler, but a baler plus a bale ejector and the trailing wagon to receive the bales.   It was an

era of greater attention to operator safety features. John Deere engineers developed Roll-Guard (r), the first widely accepted tractor roll-over protective structure (ROPS). In 1966 it was offered on the 4020 and other 'New Generation' tractors. Then the patents were made available to the entire industry so all tractor operators could have the protection John Deere engineers had made possible.

It was an era when business farming required improved traction for 'non-stop' farming. So the engineers developed power front-wheel drive, and made it available first on the 4020. And a better method of attaching dual rear wheels was developed to replace the old system of bolting extra wheels to the drive wheels mounted on the tractor's axel. A longer rear axel was offered on the 4020 so the outer wheel could be attached to the axel. To distinguish this system from the previous practice, John Deere called them 'double rear wheels'.

The 4020 saw two other significant steps in tractor evolution.  It was originally available in row-crop or standard configurations with gasoline, diesel, or LP-Gas engine (the most popular version was the row-crop diesel).  In the late 60's, demand for the LP-Gas tractors waned, and that option was dropped. Similarly, the distinctions between standard and row-crop tractors diminished; eventually the two types were blended into one.

The heart of this classic tractor was an equally classic engine with 404-cubic-inch displacement. Improved over the years with many refinements, turbocharging, and intercooling, it remained in John Deere Tractors even after the 4020 had been discontinued. The 4020 diesel was originally rated at 91.17 PTO hp."

The 4020's  Tractor Specifications at Shipment:

Maximum observed horsepower measured at the PTO at 2,2000 engine rpm in official tests.